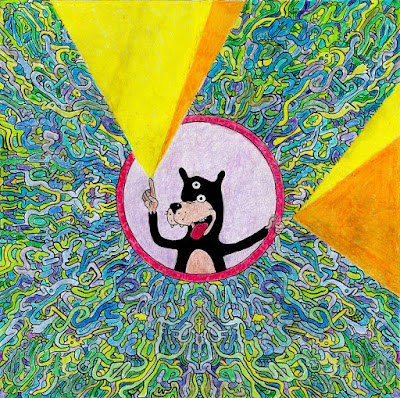 There is an innate felicity associated with purchasing and collecting records. Some enjoy spending entire evenings on the floor of their favorite local spot, sifting through cardboard discount bins of 45's hidden beneath the main displays. Every time a gem surfaces, a bit of their inner self dies happy. Others eagerly lie in wait for online deals in an attempt to triumph over the pesky, ever rising retail and shipping costs of wax. Perhaps my fondest record collecting moment was when I received my first ever music mail call. I had a shitty plinth and and a few other 7"s I had picked up at shows. My choices we're limited but there was nothing else in my mind that could compete with the idea of building a physical collection of music that I would never tire of and certainly never get rid of. Well for whatever reason I decided my first mail order would be from a lesser known, yet robust in spirit, label from Philadelphia called Evil Weevil (sadly now defunct). All I had ordered was a Cousin Brian 7" that up until that evening, was completely unknown to me. I could not say what prompted me to order it other than impulse control problems. There was a hand written thank you note in the package. The art had been done by one of the band members and the only markings on the 7" itself was an "A" scribbled on one side to annote which was which. It couldn't get any more authentic and I couldn't have been any more excited to drop the needle on it. The tracks were concise, branded by hurried licks with poppy undertones and clumsy drum's played on a kit that seemed as though it might have been kept upright by bubblegum and band-aids.

Thankfully, four years later, not much has changed. Their new (sophmore) LP gives off the same vibes at a slightly more reluctant pace. Unfortunately, their struggles to find a label that will adopt their baby means that these nine tracks may never feel the warm sunlight pouring in through the windows of a record store. However, they will surely be available for purchase online soon. Free samples below!